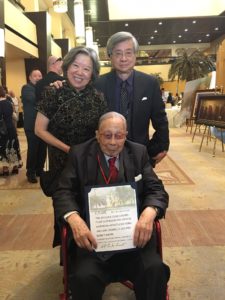 Prof. Ngin joined the Cal State Los Angeles faculty in 1993. She has done extensive ethnographic and consulting work in China, Malaysia, Indonesia and Southern California. Her research interests include the relationship between race, ethnicity and culture as they are expressed in Asian and Asian American issues. Prof. Ngin has received grants from the National Endowment for the Humanities and the Ford Foundation to examine the connections between Asian Studies and Asian American Studies. She is also instrumental in completing a proposal for the B.A. Degree program in Asian and Asian American Studies (AAAS) at CSLA. The proposal is awaiting the approval of the Chancellor’s Office.

Using this broad-based knowledge about Asia and Asian America, and a specialization on the anthropological understanding of race, culture and ethnicity, she recently consulted on three asylum applications from Southeast Asia. Two of the women won their asylum to remain in the United States; the verdict on a third is pending.

For more information on the AAAS program at Cal State LA, click here.

Professor Ngin has taught a variety of courses, but specializes in those that address the connection with the Asia – People, Culture of Asia (AAAS 200), Peoples of Asia (ANTH 414), and will be teaching the proposed Asian American Community in Southern California (ANTH 418). Professor Ngin also teaches Introduction to Cultural Anthropology (ANTH 250), Ethnographic Methods and Techniques (ANTH 480) and Maturity and Aging in Cross-Cultural Perspectives (ANTH 335).

Her primary teaching goal is to provide a critical cross-cultural, transnational, and theoretical background for students seeking an understanding of their communities as well as those preparing to further their academic degrees. This includes Service Learning experience in the communities (ANTH 335 and ANTH 418), organizing visits to local ethnic institutions (Hsi Lai Temple and San Gabriel Islamic Center) with Prof. Baker-Cristalis, and students’ ability to write and communicate clearly.

Further information on my research, publications, presentations, teaching, outreach, grants, awards and media can be found from the respective pages on this website.